Posted by admin in Press Releases

At a high-level International meeting of African Women’s Forum, organized by Crans Montana, Sophia Bekele addressed a room of delegates sharing her thoughts and experiences about being an entrepreneur and women-in-tech as well as the success of the Miss.Africa Digital foundation she runs.

The forum’s aim was to highlight African Women’s experiences, which can be described as life-enhancing and contribute to the global development and integration process. The forum ran from November 14 to 16 in Brussels (Belgium) in association with the New Leaders for Tomorrow community. 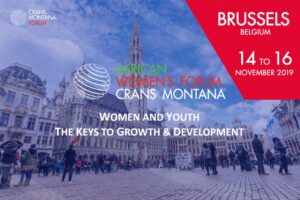 The meeting discussed African Woman as a “Born Entrepreneur” who clearly brings an innovative approach to issues concerning the challenges of employment and inclusive development in our societies. It also sought to find answer to the strategies of how we can facilitate the necessary synergies between businesses, women and the training of youth in order to build sustainable economic growth?

Bekele touched on ways to leverage the strengths of the African women and youth to drive business and entrepreneurship through use of technology. She stated that ” women are a highly visible part of the African economy, thus they run it, and this can be seen from testimonies in major African media covering Women’s work in all sectors of the economy. Our Miss.Africa digital 300 Plus women led initiatives also adds to this testimony”.

She noted, ” just before I sat to speak here, I saw an alert from my staff on my on my tablet, where I was informed via a retweet from our past Miss.Africa Digital Seed -Fund from Ghana – ‘Kumasi Hive’ – were voted in as a finalist in the Equals-in-Tech award led by ITU, a United Nations Telecom outfit. Miss.Africa Digital was recognized as the same few years ago by the same awards. Our winners therefore are tweeting thanking us – Miss.Africa digital- for this early opportunity we gave them to be where they are now” , Bekele shared with audience.

Bekele went on “Therefore, as the our honorable Chairwoman here was asking us to relate our most proud moments, I would say this is worthy of a mention, as well as the many testimonies we have on our website from women and girls across Africa that benefited from our training or seed-fund grant awards, as well as being empowered by our continued partnerships. Thus, setting the stage to benefit someone and to further see such successful role modeling is one the proudest moment in this work that I do. ”

Above: Our winners Kumasi Hive wearing Miss.Africa Digital T-Shirts for ITU’s Equals-in-Tech Campaign, later to be also announced its Winner! Congratulations from all of us at DCA Trust!

Expressing her confidence in women-in-tech, Bekele cited examples from her own foundation where the past 4 year annual competition seed fund of the Miss.Africa Digital program has seen an amazing growth. Thus, the impact of their work ranging between web and mobile app development, graphic design and entrepreneurship has created numerous opportunities for women and girls throughout Africa. This includes the Miss.Africa Ambassadors who go and champion not only our work, but use our established social media and network platforms to champion and share their own vision and work.

“Sub-Saharan Africa has shown highest number of female startup entrepreneurs relative to established businesses at 11 percent. Even our yearly Miss.Africa Digital competition exhibits a high number of application from this area, the rate of female entrepreneurship is higher in Africa than in any other region of the world thus women in the private sector represent a powerful source of economic growth and opportunity.” she said.

Women are very quick to adapt to the new digital platforms and form part of the biggest users of the emerging technologies. Thus digital technologies can enhance women’s access to finance, with mobile banking and fin-tech innovations, Bekele asserted.

Bekele concluded saying whereas challenges of Women in Digital and TechPreneruship in ‘Africa’ still exists, these will be solved with time, and urged the audience for the need to building synergies between businesses, women & training of youth to continue investing heavily in girls and young women, so they can dream, tinker, experiment, and invent to be tomorrow’s social innovators, disruptors.

Bekele Speaks on Business Ethics: “The Market has no Morality”, at the SF ISACA Chapter 2019 Fall Conference

Posted by admin in Press Releases

No Comments
Our Founder and CEO spoke at the 2019 SF ISACA Fall conference which continues to be the premier education event for information technology audit, security, governance, risk and compliance professionals.

The Industry conference held at the Hotel Nikko, 222 Mason Street San Francisco, CA 94102 featured five tracks packed with top flight speakers and cutting edge topics.
Bekele thanked the organizers for inviting her to speak, saying she was elated to be part of this program. “I used to be part of ISACA fraternity years ago when I was active in my Corporate career and also proudly served on the ISACA SF chapter Board”.
“Most business people and Corporate Executives observation is that businesses exist to make money, therefore goes unchallenged. The market system relies on a particular motive for action — Keynes called it “love of money” — which tends to undermine traditional moral teaching, – Sophia Bekele
Speaking at the session: Business Ethics, “The Market has no Morality”, Bekele stressed that the anchor point of ethics is simple, it is between what is right and wrong.
Reconciling or understanding the views of the two sides who believe wealth is created by individuals and the free market, or by the government becomes relevant, as an entire social structure and justice system is based on it, she expressed.
“Here we heard of one case involving a challenge of an individual vs. a Government and another involving a Corporation, set in two different geographic locations – US and Africa, hence the misconducts found nearly mirror each other. To my surprise, the SHE -factor was also very prevalent in both cases.”
Bekele discussed a wide array of benefits in running an ethos-based business and the ethical and moral standards of managing businesses.
In the current state where apart from the widely known improprieties of the past two decades, such as the major US accounting scandals in varying industry groups, also high profile post accounting ethics scandals and other political scandals that heavily exposed the misconducts of CEOs and Executives – similar scandals continue to dominate headline news today resulting in a series of fraud investigations, corruption, misuse of personal data, including cybercrime, which have become the latest of modern scandals.
Bekele reminded the audience that ethical behavior/ ethical conduct of corporations can bring significant benefits to a business. She spoke of her experience consulting in Corporate Governance space, in response to the US corruption scandals that started a new legislation such as Sarbanes Oxley (SOX) Act and how companies were faced with an overwhelming compliance and regulatory requirements as well as financial burdens not to make the mistakes made by those that got caught with ethical scandals. Most Corporate managers and BOD needed to turn to a strict code of ethicsand learned the hard way that ethics needed to be sewn in the fabrics of the organization.
Bekele also used her own examples, drawing her experience from two major high profile and precedence setting cases, in her start up companies, which were focused on technology transfer to emerging economies. “Comparing these two projects”, she highlighted, “here we heard of a case of challenges involving an individual vs a Government and a case of individual vs a Corporation, set in two different geographic locations – US and Africa, hence the misconducts found nearly mirror each other. To my surprise the SHE -factor was also very prevalent in both cases. My challenges here were of “principled” positions of ethics, equity transparency and morality. Trust in broken in the system and those who participate in it, which take us back to the misconduct of the human behavior”.
The common denominator of all these high profile scandals are usually characterized by an “inside job”, she stressed. There is a famous saying, “They stole without hiding because their father is chief of police”.
The lessons learned for me is that of reconciling the two views: the “ethically trained vs. the ordinary person” is the most challenging with the individuals and/or corporations, she told the august audience of governance professionals, “we are the privileged few”. In such cases, while the precedential value exposes the procedural deficiencies for corrective actions in the system, concurrently, the use of public commentaries and media coverage despite sometimes its sensationalism, becomes instrumental in educating the public and exposing the issues.
Quoting Edmund Burke, she said “The only thing necessary for the triumph of evil is for good men to do nothing.
Finally, the fact that the Market system is more efficient at creating wealth and satisfying wants has been proven, Bekele said, however the morality and immorality of the Markets are driven by financial profit motives of “individuals” working within the Market System itself. Therefore, leaving the Market to arbitrate itself without checks and balances becomes dangerous.
Some of the key takeaways to the audience included that prevention is superior to inspection, the time to avoid the results of unethical behavior is before it occurs, not after, that organizational leaders must be aware of the consequences of certain decisions, and that Conscious consumers are changing businesses, henceCorporations must evolve or lose ground to new, ethos-bases entrepreneurial models. Regulation can fix some of the problem, but personal responsibility and accountability —including, being conscious of what you invest in and buy. Also, understand what that difference is between legal and ethical. Lawyers find you a legal loophole and not fix ethics gone bad at the headlines.
Overall, “Ethics and Morality should remain as building blocks for successful Business” –Sophia Bekele.
Bekele is an International policy and governance expert.She is a Certified Information Systems Auditor (CISA), Certified Control Specialist (CCS), and certified in the Governance of Enterprise IT (CGEIT), certifications issued to professionals in the field of IS Audit, Security & Enterprise IT governance principles and practices.